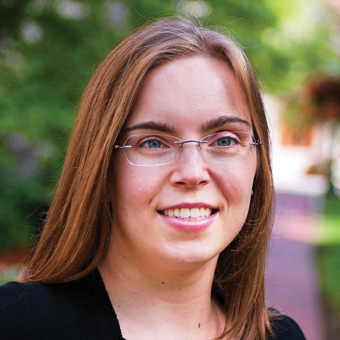 PAMELA’s research centers on bankruptcy, commercial law and consumer law. Her work primarily involves empirical studies of bankruptcy and related parts of the legal system, combining quantitative and qualitative interview-based research. Her work in business bankruptcy focuses on nonprofit entities, with a particular emphasis on how churches and other religious organizations use bankruptcy. The results of this research have been featured in such media outlets as The New York Times, Bloomberg, CBS News “Moneywatch” and Reveal. She also is a co-investigator on the Consumer Bankruptcy Project, a long-term research project studying persons who file bankruptcy that has been the leading empirical study of consumer bankruptcy for the past 35 years. The results of this research likewise have been featured in top media outlets, including The New York Times, NPR, U.S. News & World Report and the Washington Post.

Pamela previously was a visiting assistant professor at the University of Illinois College of Law and currently chairs the Center for Law, Society & Culture’s advisory board. In 2017, she received the Gavel Award for outstanding contributions to the graduating class; in 2018, she received the IU Trustees’ Teaching Award for excellence in teaching; and in 2019, she received the Leon H. Wallace Teaching Award, the highest teaching honor given to IU Maurer School of Law faculty. She is the current chair of the Creditors’ and Debtors’ Rights Section of the Association of American Law Schools (AALS), and is a past chair of the AALS Section on Commercial and Related Consumer Law. She also currently serves on the editorial advisory board of the American Bankruptcy Law Journal, and she leads the Household Finance Collaborative Research Network of the Law & Society Association, which brings together scholars from around the world who work on bankruptcy and consumer finance issues. Prior to teaching, she clerked for Hon. Thomas L. Ambro of the U.S. Third Circuit Court of Appeals, worked as an associate in the Bankruptcy and Financial Restructuring Group of Dorsey & Whitney LLP in Minneapolis, and clerked for Hon. Peter J. Walsh of the U.S. Bankruptcy Court for the District of Delaware.

Pamela mentors students whenever she can, and previously served as a board member of the Indiana University LGBTQ+ Alumni Association and as a member of Maurer Law’s Diversity & Inclusion Committee. In addition, she is a faculty adviser for OUTLaw, the university’s LGBTQ+ student organization.