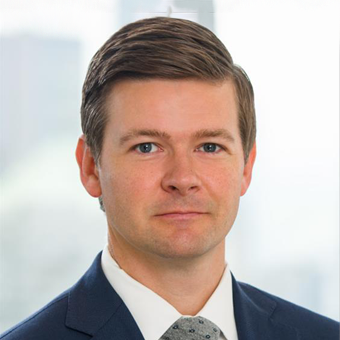 George has led large, multi-disciplinary teams in complex chapter 11 cases. He previously practiced with Jones Day and was named one of Turnarounds & Workouts’ Outstanding Young Restructuring Lawyers in 2019. He is a member of ABI and the Turnaround Management Association, and previously served on TMA New York’s NextGen Committee. He co-authored a cover story for the TMA Journal of Corporate Renewal on rights offerings, and did a podcast on the same topic for Debtwire. In addition, he helped with ABI’s Commission to Study the Reform of Chapter 11.

George has twice qualified for the Xterra off-road triathlon world championship, completed a 100-mile mountain bike race, led a four-man team in a 24-hour mountain bike race, completed the Brooklyn half marathon, and won first place in the amateur division of a modern pentathlon competition. He volunteers with the Citizens Schools initiative to teach debate to seventh and eighth graders from underserved middle schools and also actively represents various pro bono clients. He recently achieved the complete dismissal of a preference cause of action against a local charity, and has often represented tenants in disputes with landlords. In addition, he regularly raises money and plays in a yearly charity hockey game that raises funds for the Ice Hockey in Harlem program, and he has been an enthusiastic member of numerous Cycle for Survival teams.