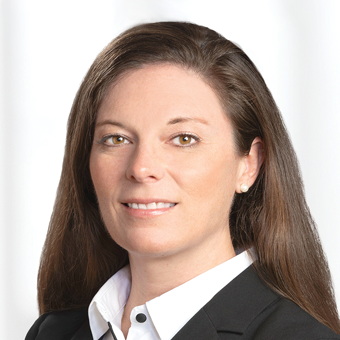 MEGAN is a shareholder and practices in the areas of bankruptcy, creditors’ rights, insolvency and real estate. She represents corporations, creditors, business owners, directors and officers, chapter 7 trustees, liquidating and creditor trustees, and assignees in insolvency litigation and collection proceedings. She advises creditors on national retail and large-scale insolvency proceedings, advances discovery strategies in connection with civil and bankruptcy litigation, advises clients on solutions to legal and business problems, and represents clients in secured and unsecured collection proceedings, forbearances, sale and leasing strategies, and litigation and various forms of asset-based lending.

Megan began her career working in the Special Assets division of a financial institution, where her team worked out large and small real estate portfolios, sometimes through the bankruptcy courts. Following the destruction in the aftermath of 9/11, she was put on a task force to reinvest $145 million of insurance proceeds back into New York City, which took years of underwriting, negotiations and relationship-building. In 2007, her team closed on the last property with a team of lawyers — and the process confirmed her desire to become a lawyer. Following law school, she clerked for Hon. Karen S. Jennemann of the U.S. Bankruptcy Court for the Middle District of Florida, Hon. Thad Collins of the U.S. Bankruptcy Court for the Northern District of Iowa and Hon. Jeff Bohn of the U.S. Bankruptcy Court for the Southern District of Texas, and was a shareholder with Trenam Law.

Megan was inspired by her mother, who, as a single parent of triplets, managed a full-time career and obtained her Ph.D. at night. She has presented at a number of industry conferences and is a frequent author. As a law student, she was awarded ABI’s Medal of Excellence, and today she is Education Chair of ABI’s Real Estate Committee. She also serves on the board of the Turnaround Management Association’s Florida Chapter. In addition, she serves on the board of her local YMCA and is an enthusiastic supporter of her local Humane Society.