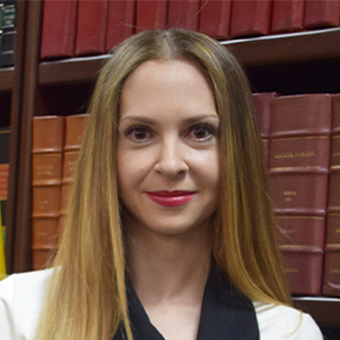 SUSANA took the oath of office in December 2018, becoming the youngest person at 34 years old to be appointed Superintendent of Bankruptcy Proceedings in Colombia, or Chief Judge of the Business Bankruptcy Court of the entire country of Colombia. She leads a team of eight judges and more than 100 clerks, and is the Delegate to represent the Republic of Colombia at the United Nations Commission on International Trade Law, Working Group V (Insolvency Law), and she actively participated in the session that approved the text of the draft guide to enactment of the model law on enterprise group insolvency. She also is currently contributing to the discussions of the draft text on a simplified insolvency regime of micro, small and medium-sized enterprises. As Superintendent of Bankruptcy Proceedings, she led the drafting process of the reforms to the bankruptcy regime to address the effects of the COVID-19 crisis. As a result, the Government of Colombia issued Decrees 560 and 772 in April and June 2020, which provided for the creation of a pre-judicial bankruptcy proceeding, the incorporation of artificial intelligence tools to bankruptcy cases, and the creation of a simplified insolvency regime for small enterprises.

Susana was 16 when she started law school in Puebla, Mexico, after her parents moved there. Even at a young age, she was certain that she wanted to be a litigator, and after a year she moved back to Colombia to finish law school. Prior to becoming a judge, she developed a specialty in business bankruptcy law for 12 years with the largest law firm in Colombia, Brigard & Urrutia, where she was a director and headed the firm’s bankruptcy practice. she was the youngest associate to become a director of the firm. Her personal struggle with bankruptcy practice in Colombia has been with its culture: Insolvency practitioners are not specialized nor have an approach that privileges litigation to negotiation. One of her goals, when she took office as Superintendent of Bankruptcy Proceedings, was to change that culture by promoting the aggravating the situation for all stakeholders and sophisticating the bankruptcy system. She believes that she has partially achieved this goal, as the culture has changed already, and statistically fewer reorganizations have converted to liquidation due to any hostile behavior of the parties involved.