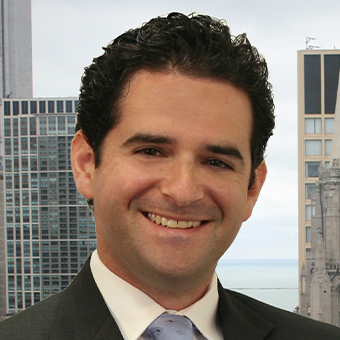 “[B]ecause he understands and appreciates the positions of all parties, he is often able to achieve a compromise of disputes where less capable attorneys cannot.”

MICHAEL is a partner at Sugar Felsenthal Grais & Helsinger LLP, where he represents distressed companies and their creditors and principals with their goals and material challenges. As the deputy chair of the firm’s Restructuring, Insolvency and Special Situations practice groups, he guides private businesses, asset-purchasers, private-equity firms, family offices, bankruptcy committees and plan trustees through distressed transactions and situations.

Michael has been named an Illinois Rising Star in Super Lawyers since 2016 and is rated AV-Preeminent by Martindale-Hubbell. He has also been awarded Emerging Leader of the Year by the Chicago/Midwest Chapter of the Turnaround Management Association, as well as The M&A Advisor. He is the President-Elect of the Chicago/Midwest Chapter of the Turnaround Management Association and will serve as its president in 2022. During law school, he was a research assistant for Prof. Robert Lawless, the Reporter for ABI’s Commission on Consumer Bankruptcy, and he subsequently served as an adjunct professor at the law school. He is also a frequent writer on bankruptcy-related topics and has published a dozen articles in a variety of highly regarded bankruptcy law publications, including three articles in the ABI Journal. In addition, he is an associate editor and co-author of ABI’s recently published book on chapter 12, Chapter 12 from A to Z: A Guide to Bankruptcy for Family Farmers and Family Fishermen.

Michael’s introduction to the world of insolvency was exceedingly personal. He grew up in a small family business that imported and distributed photographic accessories such as camera bags. After more than 50 years, the company entered into an ABC in 2009 due to changes in the photographic industry and decreased retail spending during the Great Recession. As a third-year law student, he found himself on countless phone calls with the company’s advisors, assessing the best way to wind down the business. In his personal time, he serves as a volunteer director of his local Parks Foundation and coaches his six-year-old daughter’s soccer team.