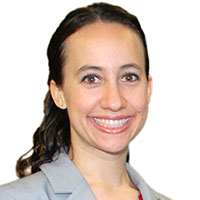 “[Jolene] embodies the ideals of civility, ethics, and professionalism.”

JOLENE is an Assistant U.S. Attorney in the Tax Division of the U.S. Attorney’s Office in Los Angeles, where she primarily handles bankruptcy tax litigation in the Central District of California. She also serves as the Office’s Criminal Bankruptcy Fraud Referral Coordinator. She is frequently sought-after as a bankruptcy tax expert to present at bar events and to train others, including law students, the IRS, and other federal agencies, as well as chapter 7 trustees, chapter 13 trustees, subchapter V trustees, other AUSAs and private practitioners, on important bankruptcy matters. In addition, she has taught multiple courses on bankruptcy-related matters at the National Advocacy Center. Within her office, she takes an active mentorship role and assists in training the externs in the Tax Division, taking a personal interest in their growth and career development.

Prior to joining the U.S. Attorney’s Office, she was a judicial law clerk for Hon. Mark D. Houle and Hon. Deborah J. Saltzman in the U.S. Bankruptcy Court for the Central District of California. She was Judge Houle’s law clerk when he sat pro tem on the Ninth Circuit Bankruptcy Appellate Panel.

Jolene’s law review article “Stern v. Marshall: The Earthquake that Hit the Bankruptcy Courts and the Aftershocks that Followed,” 45 Loy. L.A. L. Rev. 587 (2012), has been cited in multiple publications, including amicus curiae to the Ninth Circuit and U.S. Supreme Court.

During law school, Jolene externed at the Children’s Law Center of California, representing children in the dependency court system. She also served as a research assistant to Loyola Law School’s associate dean, researching issues related to international human rights. In addition, she encourages and educates future generations of bankruptcy lawyers through her volunteering with programs at Loyola Law School, involvement with externs at the U.S. Bankruptcy Court and mentorship of law students.