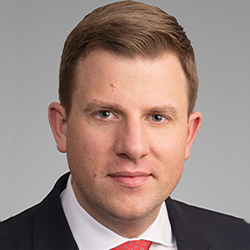 JUSTIN is a partner with Sheppard, Mullin, Richter & Hampton LLP and concentrates his practice on all aspects of corporate restructuring, bankruptcy and financial distress. He represents clients across a wide range of matters, including debtor and creditor representations. He has substantial experience in out-of-court and in-court restructurings, primarily in the Southern District of New York, Eastern District of Virginia, District of Delaware and Southern District of Texas. Prior to entering private practice, he served with distinction as an aviation warfare systems operator at Patrol Squadron Five and as a weapons tactics instructor at Patrol and Reconnaissance Wing Eleven. During his nearly 10 years of active duty in the U.S. Navy, he received the Navy Commendation Medal twice, including once for meritorious service during combat operations in Iraq. He also received the Global War on Terrorism Medal for his service in Kandahar, Afghanistan.

Justin believes that his strong desire to seek and serve the needs of others accounts for his success in the military and as a lawyer. He served as the inaugural chairperson of the Advisory Committee to the Board of the National Veterans Legal Services Program, and in his capacity as a member of a P-3C Orion combat aircrew, he was routinely responsible for the welfare and safety of his crewmembers, including while in combat in Iraq and Afghanistan. Service above self is what ultimately compelled him to pursue law school after earning his undergraduate degree while in the Navy. At that time, he had no idea that he’d ultimately become a restructuring lawyer; that journey began at the start of his second year of law school, when his best friend suggested that they pair up to compete at the ABI/St. John’s University School of Law Duberstein Moot Court Competition. Their team placed third — the best result his school had ever achieved.

Earlier this year, Justin co-launched a podcast titled, Restructure THIS!, which focuses on issues and developments in the corporate restructuring industry. Each episode features an in-depth interview with a high-profile member of the restructuring industry, including leading attorneys, financial advisors, investment bankers and distressed-debt investors. Since the beginning of 2022, 16 episodes have been produced, two of them in conjunction with ABI. He has been recognized among Lawdragon’s 500 Leading U.S. Bankruptcy and Restructuring Lawyers for 2022, selected as an “Outstanding Restructuring Lawyer” by Turnarounds & Workouts for 2021, and honored by the Turnaround Management Association’s (TMA) Chicago/Midwest Chapter with the 2021 “Large Company Turnaround of the Year” award for his team’s role as lead restructuring counsel to Alpha Media Holdings LLC and certain of its affiliates in their successful chapter 11 cases filed in the Eastern District of Virginia. He also was named to Crain’s Chicago Business’s 2021 list of Rising Stars in Law.