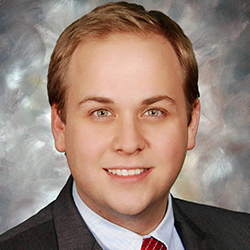 In addition to his work with the judiciary, Caleb is an adjunct professor at Washington and Lee University School of Law, where he teaches bankruptcy law. In that role, he has given presentations on both bankruptcy and judicial clerkships for other classes and at larger events for the law school to spark interest in bankruptcy practice and clerking. Many of his students have applied for and received bankruptcy clerkships.

Caleb is passionate about consumer bankruptcy issues and serves as a coordinating editor for the ABI Journal’s On the Edge column. He has also published articles for the ABI Journal as well as ABI’s Consumer Committee newsletter. Further, he grades briefs for the Duberstein Moot Court Competition and is involved with his local CARE chapter.

In his free time, Caleb serves as a member of the board of directors of Second Home Learning Center, a nonprofit that provides out-of-school care, education and development opportunities for children in low-income households in Harrisonburg, Va. The majority of students are children from the Latino immigrant population, many of whom face financial struggles and immigration issues daily; being able to effectively communicate with parents and their children to help address their issues (e.g., safety and food insecurity) has proved truly rewarding for him. His favorite activity with Second Home is the annual musical (most recently Beauty and the Beast Jr.). He is currently serving on the Executive Board of Second Home as president, following three terms as secretary.