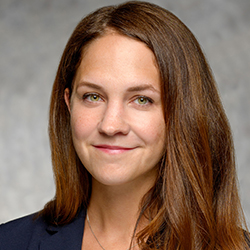 ERIN is a partner in Hughes Hubbard & Reed LLP’s Corporate Reorganization department, where she focuses on bankruptcy, restructuring and commercial litigation. Her diverse practice includes the representation of debtors and creditors in a wide range of matters, including in- and out-of-court restructurings and bankruptcy litigation,. She also provides bankruptcy advice in connection with financing transactions and maintains an active pro bono practice, representing clients in prisoners’ rights, immigration and family law cases.

A first-generation college and law school graduate, Erin was recognized in 2022 as an “Outstanding Young Restructuring Lawyer” by Turnarounds & Workouts, an honor given to just 12 attorneys nationwide under the age of 40. She also has been recognized as a “Rising Star” by New York Super Lawyers for seven consecutive years, and was recommended in The Legal 500 United States in the area of Finance – Restructuring (including Bankruptcy): Corporate in 2021 and 2022. In 2022, she participated on panels at ABI’s VALCON 2022 conference and for IWIRC NY’s “Hot Topic Series.” She also has published articles in such periodicals as Airline Economics, the ABI Journal and the New York Law Journal.

Erin is an ABI member, a devoted mentor to many young women at her firm, and an active participant in groups that focus on the connection, development and promotion of women in the insolvency industry. She is co-chair of her firm’s Women’s Roundtable, a member of her firm’s Mentoring Task Force, a board member of the New York Chapter of the International Women’s Insolvency & Restructuring Confederation (IWIRC), and a member of the International Aviation Women’s Association. In addition, she successfully helped secure asylum for a pro bono client who had been arrested and detained after fleeing Nigeria to escape physical and sexual abuse based on her sexual orientation. She also helped secure the dismissal of a murder conviction of a client who had served more than 23 years in prison, which made headlines in The New York Times, the New York Post, the New York Daily News and the front page of the New York Law Journal.