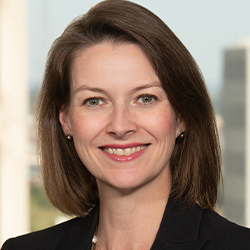 DANIELLE is counsel with Phelps Dunbar LLP and practices in the areas of bankruptcy, creditors’ rights and commercial litigation. In her bankruptcy practice, she frequently represents community banks and global financial institutions, as well as manufacturers, landlords and asset-purchasers in reorganizations and liquidations. Admitted in Florida, Alabama and Mississippi, she brings extensive experience earned from representing clients across and beyond the firm’s footprint and in numerous industries, including marine and energy, health care, retail, hospitality, commercial real estate, transportation, and banking and financial services. She advises distressed companies, corporate officers and directors, and guarantors in pre-bankruptcy planning, out-of-court workouts, wind downs and debt-restructurings. In her complementary creditors’ rights practice, she represents creditors in commercial foreclosures, in- and out-of-court collection activities, and Uniform Commercial Code sales in the exercise of other Article 9 remedies, and she has obtained payments of sizable debts and obligations. In her commercial litigation practice, she has defended lender-liability claims, such as automatic stay and discharge-injunction violations, as well as breachs of loan-participation agreements. She has also litigated contract disputes in state, bankruptcy and other federal courts.

Danielle established the firm’s Mobile bankruptcy practice in 2015 and now helps lead the firmwide practice group. Before joining Phelps Dunbar, she clerked for Hon. Margaret A. Mahoney and Hon. Henry A. Callaway in the U.S. Bankruptcy Court for the Southern District of Alabama. As a second-year lawyer, she served on the Alabama Law Institute’s Committee on the New Uniform Voidable Transactions Act and revised language in the uniform act to clarify how to prove actual fraud. That experience served her well when she recently wrote “Local Bankruptcy Rules: Mississippi (N.D./S.D. Miss.)” for Practical Law Bankruptcy & Restructuring and presented at the Alabama Bankers Association’s Bank Counsel Conference. In addition, she was elected to Mobile Bay Magazine’s “40 Under 40” and The Best Lawyers in America’s Ones to Watch in Bankruptcy and Creditor/Debtor Rights/Insolvency and Reorganization Law. She also recently took the American Board of Certification exam to apply for business bankruptcy specialist certification.

Danielle has consistently shown a commitment to public service. Between college and law school, she taught English for the Peace Corps in Kyrgyzstan. After her two-week old son was diagnosed with cystic fibrosis, and the Affordable Care Act (ACA) came under threat, she worked with health care advocacy groups and organized hundreds of activists to flood town hall meetings with questions on ACA protections, jumping in front of TV cameras with pictures of her son and her story. In addition, she organized rallies and public prayer vigils for those with preexisting conditions, generating positive press to support the ACA. Springboarding off that experience, she volunteered with Doug Jones’s campaign for U.S. Senate in 2017. The next year, she was the Democratic candidate for her state house district. In 2019, she volunteered with a local campaign to raise and earmark a tax for her local public schools. She now serves on an all-volunteer board that oversees how those funds are spent. In addition, she serves as secretary of the International Women’s Restructuring & Insolvency Confederation’s Gulf Coast Chapter, and she has chaired the business bankruptcy section of the Southern District of Alabama’s bankruptcy bar.