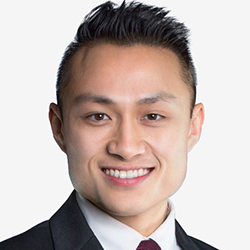 J.D.
UNIVERSITY OF CALIFORNIA, HASTINGS COLLEGE OF THE LAW

CHRISTOPHER is an associate with ArentFox Schiff LLP, where he specializes in business and financial restructuring matters. He also regularly advises companies that are navigating the chapter 11 process and on related risks in corporate and debt financing transactions. A substantial portion of his practice is dedicated to representing sellers, stalking-horse bidders and overbidders in distressed asset sales. His recent cases have involved sales of the going-concern assets of an automotive driving-experience company in Las Vegas and an open-air shopping mall and a brewery in Southern California, and the intellectual property of a pharmaceutical company based in Northern California. He also focuses on sports-related investigations and has participated in compliance and corporate governance-related investigations involving Olympic sports governing bodies.

Christopher clerked for Hon. Maureen Tighe of the U.S. Bankruptcy Court for the Central District of California. Before that, he served as a legal intern in the corporate in-house department for SunPower Corp., a publicly traded renewable energy company. He also worked as a legal intern at the seventh-largest law firm in China, AllBright Law Offices in Shanghai, in its general commercial, corporate and M&A department.

Christopher immigrated from Hong Kong with his family in 1997, and to this day he attributes much of his success and the person he is now to the immigrant experience. Within his firm, he was selected by the vote of its Executive Committee to be a part of the “ArentFox Fellows,” a three-year leadership-development program for high-potential associates within the firm — one of the youngest practitioners to have ever been selected for the program. This year, he was appointed firmwide co-head of the Asian Inclusion Group and a member of the firm’s Minority Committee to improve diversity, equality and inclusion. Outside of the office, he serves as a board member of the Boys & Girls Club of Venice, which develops afterschool programs that engage local youth to improve their future prospects and mental well-being via tutoring, coding classes, financial literacy, drug-prevention programs and onsite therapy.