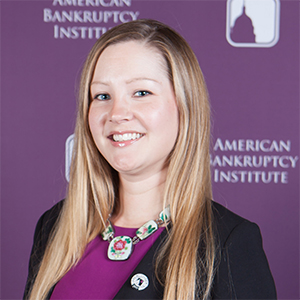 SAGE focuses on the representation of middle-market and large corporations, spanning such industries as health care, retail and aerospace. In 2011, she was the lead associate on the team awarded the M&A Advisor Cross Border Deal of the Year Award for In re Sea Launch LLP. Her creditor practice includes acting as national bankruptcy counsel to a major oil company and wireless provider, and restaurant and hotel franchisors. She has appeared in complex chapter 11 and 15 cases, including mega-cases such as Energy Future Holdings. She is currently representing an RMBS trustee group asserting $12 billion in claims against Lehman Brothers. In addition, she serves on the firm’s Women’s Initiative Committee and Pro Bono Committee, and previously served as a partner on its Associates and Hiring Committees.

Sage has served as education chair and special projects director of ABI’s Legislation Committee, and she has risen through the ranks of the International Women’s Insolvency & Restructuring Confederation as co-chair and now director of its Georgia Network. In addition, she serves as vice chair of the Atlanta Bar’s Bankruptcy Section. For her efforts, she has been listed as a “Rising Star” in Super Lawyers from 2012-17 and as an “Up and Coming Lawyer” for Bankruptcy/Restructuring by Chambers USA for 2017.

Sage maintains a pro bono practice, and she successfully obtained a hardship discharge of student loan debt for a disabled chapter 7 debtor and a nondischargeable judgment for a national nonprofit organization against a former employee for embezzling and converting funds. In addition, she mentors bankruptcy law clerks and volunteers with the Credit Abuse Resistance Education (CARE) program, which makes financial literacy presentations to students and young adults, as well as with the Atlanta Bar Bankruptcy Section’s Adversary Proceeding Project.