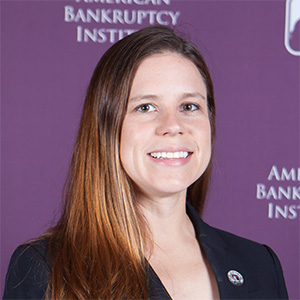 ELIZABETH represents the Division in bankruptcy matters throughout the Commonwealth of Virginia and the country. She also represents the Division in juvenile and domestic-relations courts throughout the state, and she advises and prepares proposed policies for Division matters related to bankruptcy. She previously practiced with several law firms, representing creditors, lenders, asset-purchasers, official committees and other parties in interest in cases under all chapters of the Bankruptcy Code, including small and mid-size corporate debtors in all stages of chapter 7 and chapter 11 cases, as well as chapter 7 trustees in all aspects of estate administration.

She is a frequent author for the ABI Journal, is an editor for ABI’s Volo site, edited The Best of ABI: The Year in Consumer Bankruptcy 2016, and contributed updates to ABI’s Consumer Bankruptcy: Fundamentals of Chapter 7 and Chapter 13 of the U.S. Bankruptcy Code, Fourth Edition.

Elizabeth practices in an industry that can be rife with emotions, and while it has always been important to her to be a zealous advocate for her clients, she strives to not lose herself as a person in the process. As a result, she has been able to cultivate professional relationships and a professional reputation that allows her to pursue the best possible results in each case in which she is involved.