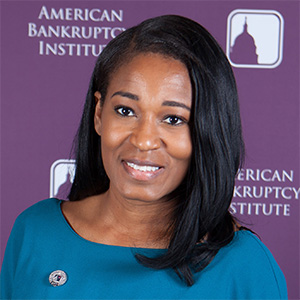 MONIQUE represents parties in various commercial transactions and corporate restructuring, compliance, estate-planning and litigation matters. She previously was the managing member of her own firm — The Hayes Firm, PLLC — and clerked for Hon. Laurel M. Isicoff of the U.S. Bankruptcy Court for the Southern District of Florida, and she has represented trustees and receivers, nonprofits, creditors’ committees and commercial tenants.

This is not Monique’s first “40 Under 40” recognition. She was included in the 40 under 40 Outstanding Lawyers of Miami-Dade County by the Cystic Fibrosis Foundation and has been recognized by Brickell Magazine as one of the Top 20 Professionals Under 40. In addition, she received the IWIRC Rising Star Award and the inaugural Blackshear Fellowship Award in 2007, which is given to select candidates each year by the National Conference of Bankruptcy Judges. She was also honored by the University of South Florida as the 2014 Young Alumnus of the Year and received the Sojourner Truth Award from the Miami-Dade Business & Professional Women’s Alliance in recognition of her service to women in the business community. Most recently, she received the prestigious Kathryn Heidt Award from the Business Law Section of the American Bar Association.

An active philanthropist, Monique has been recognized among the United Way Miami-Dade Young Leaders and served on its executive board for five years. She is also a member of the Miami Foundation Fellows Class 7, a civic leadership development program, and is the Florida Network Chair for the International Women’s Insolvency and Restructuring Confederation (IWIRC). In addition, she is president-elect of the Wilkie D. Ferguson Bar Association — the oldest and largest bar association of African-Americans in Miami-Dade County.