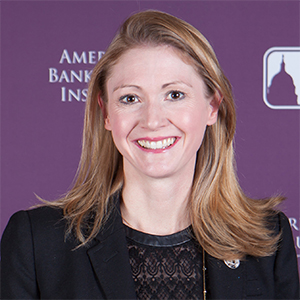 JENNIFER is a restructuring attorney and now the Director of Business Development at the firm, and has represented chapter 11 debtors, creditors’ and retirees’ committees, chapter 7 trustees, stalking-horse purchasers, liquidating trustees and other creditors in bankruptcy proceedings, preference actions, commercial transactions, commercial litigation and out-of-court restructurings. She has considerable experience in the automotive sector, representing original equipment manufacturers and tiered suppliers. But her notable work started as early as her third year of practice, when she took the lead on a two-day trial in an adversary proceeding between a debtor and 363 purchaser.

Jennifer is co-chair of ABI’s Young & New Members Committee and has been actively involved in the committee since 2012, having served as membership relations director, newsletter editor and education director. She also serves on the ABI Southeast Bankruptcy Workshop Advisory Board and on the ABI Development Committee as a representative for the South region. She is a coordinating editor for the ABI Journal’s Building Blocks column and is an Eleventh Circuit editor for VOLO, ABI’s circuit court first responder site. In addition, she has served as communications director and programs director of the International Women’s Insolvency & Restructuring Confederation and has recently joined the organization’s executive board as the vice director of Finance. Previously, she chaired the Bankruptcy and Commercial Law Section of the Birmingham Bar Association.

In addition to her involvement in various restructuring organizations and bar association work, Jennifer volunteers for the Junior League of New York and the Catholic Renewal Young Professionals Group. She has also volunteered  with the Junior League of Birmingham (Ala.) and sat on the junior board of Preschool Partners (a preschool program for at-risk kids in Birmingham (Ala.)). While at the University of Mississippi School of Law, she was an associate articles editor of the Mississippi Law Journal and a moot court competition director, and served as both a senator and secretary of the Law School Student Government Association.