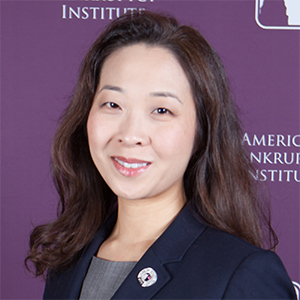 JEANNIE represents trade creditors and financial institutions in matters involving insolvency, creditors’ rights, receiverships and commercial litigation. She also has represented debtors in possession, chapter 11 trustees and unsecured creditors’ committees, as well as asset-purchasers, trade creditors and individual creditors in complex liquidation and reorganization cases across a broad spectrum of industries. Prior to her work with the firm, she clerked for judges in both the Central and Northern Districts of California, and was an extern with the U.S. Trustee Program. Jeannie has spoken a number of times, including at the AIRA’s annual conference in 2016 and 2017. She has also been invited to discuss the U.S. bankruptcy court system and insolvency practice at the International Association of Korean Lawyers’ annual conference, and she was a member of NCBJ’s 2017 NextGen class. In addition, she is serving on the NCBJ Education Committee for the 2018 Conference and assisting with the publication of an update to the California State Bar’s California Assignments for the Benefit of Creditors Desk Guide, forthcoming in early 2018. From 2013-16, she was named a Super Lawyers Southern California “Rising Star.”

As one of the first judicial law clerks for a new bankruptcy judge during the height of the Great Recession in one of the most depressed communities in the country, Jeannie reached out to seasoned law clerks and judges to cull “best practices” to establish chambers protocols and procedures. Since then, she has produced substantive CLE programs and community service events; served as a co-chair, director or executive officer of several bar organizations and committees focused on insolvency and diversity and inclusion; and mentored law students seeking judicial clerkship opportunities. In addition, she has volunteered as an attorney supervisor for the University of California – Irvine School of Law’s Domestic Violence Clinic.