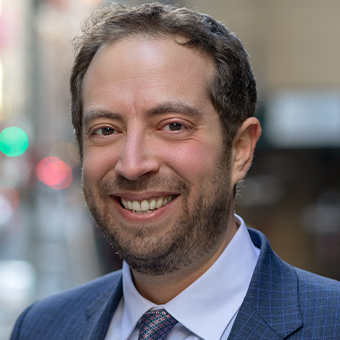 “Alex’s unassuming intellect is rivaled only by his unrelenting authenticity.”

ALEX is a partner in the New York office of Milbank LLP, where he is a member of the firm’s Financial Restructuring Group and Litigation & Arbitration Group. He is a commercial litigator whose practice focuses primarily on bankruptcy, insolvency and restructuring-related disputes. He has represented creditors, debtors, private-equity sponsors, official committees, ad hoc groups, collateral agents, shareholders, and bidders in bankruptcy proceedings and other litigation matters arising out of insolvency scenarios and financial restructuring transactions. He has been involved in such high-profile cases as Purdue Pharma, Aegean Marine Petroleum, Breitburn Energy, MidStates Petroleum, GenOn Energy, and Marblegate v. Education Management. Before joining Milbank, he was an associate in the Restructuring & Finance and Litigation departments at Wachtell, Lipton, Rosen & Katz. In addition, he clerked for Hon. Debra A. Livingston of the U.S. Court of Appeals for the Second Circuit (2007-2008) and for Hon. Lewis A. Kaplan of the U.S. District Court for the Southern District of New York (2006-2007).

In the last nine years, Alex has co-authored publications concerning restructuring and insolvency-related issues that have appeared in the Harvard Law School Bankruptcy Roundtable and the Harvard Law School Forum on Corporate Governance and Financial Regulation. He also co-authored a lengthy law review article concerning the relationship and differences between fraudulent transfer and preference law that was published in the American Bankruptcy Law Journal. Most recently, he authored a chapter on fraudulent transfer law for the renowned treatise Commercial Litigation in New York Courts, and will soon be publishing a corresponding chapter for the treatise Business & Commercial Litigation in Federal Courts.

Alex is dedicated to pro bono work and community service, particularly when it comes to helping underprivileged youth. While in law school, he taught Street Law classes to incarcerated juveniles, with the goal of helping them understand their rights and interact more productively with law enforcement. Following graduation, he participated in a diversity pipeline program with Street Law, teaching classes and hosting a mock-oral argument program for underprivileged high school students in New York City, with the goal of interesting them in becoming lawyers. He currently represents a prisoner in Louisiana who was sentenced to life without parole for a crime he committed three decades ago at the age of 16. Based on recent changes in constitutional law, he was victorious in obtaining a reduced sentence for his client that includes the possibility of parole, and he will continue the representation through the parole stage.

Alex fell into insolvency law by accident: He began practicing at the start of the Great Recession, and restructuring matters dominated the workflow in his firm at the time. He grew to love bankruptcy law and decided to focus on it full time. Today, he mentors a number of junior associates at his firm and participates extensively in the summer associate program. On multiple occasions, he has taught a bankruptcy 101 seminar to other attorneys and summer associates at his firm. Soon to be the co-chair of Milbank’s hiring committee, he also leads efforts to expand the firm’s outreach to minority candidates and members of the LGBTQ+ community. In his free time, one of his passions is traveling around the country with his wife, and sometimes lucky associates, riding some of the tallest, fastest and scariest roller coasters.