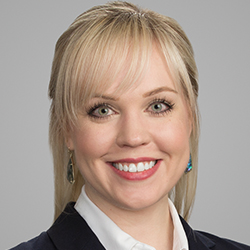 AMBER is a partner-elect with Gray Reed & McGraw LLP and guides debtors, creditors, official committees and other parties through every phase of commercial bankruptcy and creditors’ rights matters before courts in Texas and across the country. She has helped clients achieve positive outcomes in difficult cases spanning many industries, from oil and gas to health care and retail to restaurants, construction and manufacturing. She also handles bankruptcy-related litigation involving fraudulent transfers, preference actions, contract disputes and many more. Before joining Gray Reed, she clerked for Hon. Harlin D. Hale, Chief U.S. Bankruptcy Judge for the Northern District of Texas. She will become a partner at Gray Reed on Jan. 1, 2023.

Amber is committed to helping young lawyers succeed and to building a more diverse, equitable, and inclusive future for the insolvency legal community. She leads the TAG Subcommittee of ABI’s Diversity & Inclusion Working Group (DWG) and the Pipeline Programs Subcommittee of the Diversity, Equity and Inclusion (DEI) Committee for the Bankruptcy Law Section of the State Bar of Texas (BLS), and she serves as Member Relations Director for ABI’s Young and New Members Committee. She also serves on Gray Reed’s DEI committee. She created and secured funding and approvals for an annual BLS scholarship for a diverse law student who is interested in pursuing a career as a bankruptcy lawyer, and led the selection committee for the scholarship. She helped plan last year’s ABA JIOP “Pathways to the Bench” program and is currently serving as attorney co-chair of the Dallas segment of the 2023 Roadways to the Bench program.

Amber is an active member of the BLS and myriad other organizations. She currently serves as secretary on the BLS Council, and previously served as vice president of Law School Relations and chair of its Young Lawyers Committee. In the former role, she almost single-handedly planned, coordinated and ran a two-day Fifth Circuit moot court competition that serves as a formal training ground for teams preparing for the national Duberstein Bankruptcy Moot Court Competition. She also previously served as president of the DFW Association of Young Bankruptcy Lawyers and chaired the American Inns of Court New Lawyers Task Force. In addition, she has served on the board of the DFW Chapter of the International Women’s Insolvency & Restructuring Confederation since 2017.

On top of Amber’s commitment to the future of the legal profession, she is involved with bettering the non-legal community. She has volunteered with the Human Rights Initiative of North Texas; the Dallas Bar Association Legal Line, a free legal hotline; the Dallas Children’s Advocacy Center; Habitat for Humanity; the Children’s Hunger Fund; and the North Texas Chapter of the Leukemia and Lymphoma Society. She also has been instrumental in launching a law school pro bono project at SMU Dedman School of Law.

Amber was awarded the 2021 Romina Mulloy-Bossio Achievement Award by the State Bar of Texas’s BLS, and has been recognized as a “Best Lawyer Under 40” by D Magazine, a “Rising Star” by Texas Super Lawyers and a “One to Watch” by The Best Lawyers in America. She also participated in NCBJ’s NextGen program in 2022, and she received a Presidential Citation from the Dallas Bar Association for her work planning a series of CLE sessions on helpful bankruptcy law topics for the wider bar.