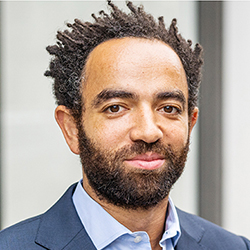 Ben has a passion for cooking, travel (38 countries and counting) and sports, but more than that, he has been a champion of diversity and inclusion in the industry. He has consistently used his position to promote initiatives that will increase access to the profession for aspiring lawyers from nontraditional and minority backgrounds. He volunteers as an advisory board member of Black Lawyers Matter, which provides mentors for aspiring black lawyers around the U.K., and to date he has recruited more than 50 mentors from his network, all senior lawyers from firms like Squire Patton Boggs, Morrison & Foerster and McDermott. He also encouraged Gordon Brothers to sponsor the program, and the firm’s entire Global legal team signed up to be mentors. In addition, he volunteers for Outrunners, which provides after-school running clubs, mentoring and career coaching for children in East London, by contributing to its “run your career” events and “sprint” internship initiative.