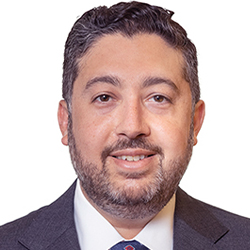 DAVID is a partner in Dechert LLP’s Financial Restructuring group. He focuses on representing debtors, official and ad hoc committees, creditors, asset-acquirers and other interested parties in chapter 11 bankruptcy cases, cross-border insolvency matters, out-of-court restructurings, and restructurings of sovereign and governmental debt. He also has broad experience in commercial litigation matters, including securities litigation, shareholder derivative litigation, mergers and acquisitions litigation, and other complex disputes. He has devoted a significant portion of his practice to representing Latin American parties and handling matters arising in Latin America, including representing sovereign and commercial actors in restructuring and litigation matters, and representing parties in connection with internal investigations and regulatory inquiries.

Over the past two years, David played a leading role for the unsecured creditors’ committee in the LATAM Airlines bankruptcy, one of the largest chapter 11 cases of the COVID-19 era. Previously, he represented Argentina in its 2016 sovereign debt restructuring, the U.S. Treasury and FEMA in extending disaster relief to Puerto Rico in the context of Puerto Rico’s bankruptcy proceedings, and The Weinstein Company as debtors’ counsel in its chapter 11 case. He also represented PG&E in one of the largest bankruptcies in U.S. history, engineering the framework for estimation proceedings to value billions of dollars in wildfire claims, which led to a settlement that was a key feature of PG&E’s plan. He has been recognized for financial restructuring by The Legal 500 US.

David became an insolvency professional because of his interest in global citizenship. Before attending college, he lived in Spain and learned Spanish by taking walks with his host family’s 15-year-old son. Years later, his Spanish-speaking skills enabled him to take a lead role in Argentina’s sovereign debt restructuring, including litigation that cleared the way for Argentina to access the global capital markets for the first time since 2001.

David is also involved in pro bono work. At his prior firm, he led its pro bono representations of children with disabilities for whom housing issues posed an obstacle to their care. He assisted a child with asthma whose public housing apartment was infested with mold, coming within days of suing a city agency before the agency finally moved his family to a new home. He similarly helped the family of a child with a genetic disease avoid eviction and find new housing that could accommodate the child’s medical equipment. At his current firm, his pro bono practice focuses on human trafficking. He also prides himself on being a strong manager and mentor of young legal talent.