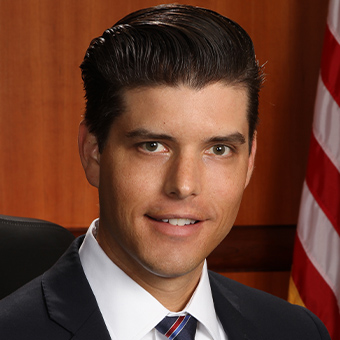 U.S. Bankruptcy Court for the District of Idaho
Boise, ID

“Noah is a first-class individual and … will bring honor and reputation to Idaho’s Bankruptcy Court.”

NOAH was appointed a U.S. Bankruptcy Judge on Aug. 31, 2020, by the Ninth Circuit Court of Appeals. Prior to his appointment, he practiced commercial litigation and bankruptcy law in Boise, Idaho, primarily representing creditors and trustees in chapter 7, 11, 12 and 13 proceedings. He frequently represented financial institutions in complex commercial litigation and workout agreements. From 2014-2020, he served as a chapter 7 panel trustee for the District of Idaho, even though he was on a partnership track at his firm.

Noah previously clerked for Hon. Joel D. Horton on the Idaho Supreme Court and was a member of the Idaho Law Foundation’s Continuing Legal Education Committee. This fall, he will serve as an adjunct professor at the University of Idaho and co-teach the bankruptcy class with fellow bankruptcy judges.

Noah’s path to becoming a bankruptcy judge has been inspired in large part by former ABI President Ford Elsaesser, for whom his mother has worked since 1984. His first job during high school was working for Elsaesser’s chapter 7 trustee office, where he was mainly responsible for maintaining the paper files before bankruptcy courts had adopted electronic filing. Elsaesser encouraged hm to apply to participate on the University of Idaho bankruptcy moot court team, which competes in the Duberstein Bankruptcy Moot Court Competition, sponsored each year by ABI and St. John’s University School of Law. He competed in the Duberstein competition twice, which cemented his desire to be a bankruptcy practitioner. Since graduating law school, he has coached 10 different University of Idaho Law School teams at the Duberstein Moot Court Competition — something he considers one of the most rewarding experiences of his career.