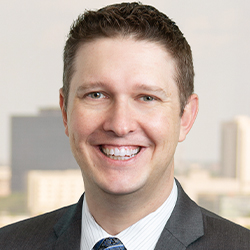 JASON is a partner at Spencer Fane LLP and represents clients in bankruptcy proceedings and litigation. His practice centers primarily on business bankruptcies, reorganizations and restructurings, and he handles the full spectrum of bankruptcy litigation matters, including preference, fraudulent transfer, discharge, dischargeability and other state law-based actions. He works with clients in a wide variety of industries, with a focus in the hospitality, manufacturing, restaurant, and oil and gas industries. Notably, in 2021 he represented the New York Attorney General in the NRA bankruptcy case filed in Texas; he and his colleagues obtained the dismissal of the NRA’s bankruptcy case, resulting in an opinion now frequently cited for bad-faith filings.

Jason became interested in bankruptcy after his first year of law school, when he inquired about the practice area while externing for a district court judge. Because his undergraduate focus had been venture capital and entrepreneurship, he wondered whether he could use the same set of skills that are necessary to start a business to help put broken ones back together. After attending a number of hearings in bankruptcy court, and attending a CLE session given for district court clerks, he became enthralled with the entire process and practice, and decided to commit to becoming a bankruptcy attorney.

Jason is a past chairman of the Dallas Bar Association’s (DBA) Bankruptcy and Commercial Law Section, a Barrister in the John C. Ford American Inn of Court, a former officer of the DFW Association of Young Bankruptcy Lawyers, and a member of the 2016 Dallas Association of Young Lawyers’ Leadership Class, during which time he helped plan a fundraiser that benefited underprivileged children in the Dallas-Fort Worth area. He was named to Texas Super Lawyer’s “Rising Star” list from 2017-22, as well as to D Magazine’s “Best Lawyers in Dallas” list in 2019 and 2021. Outside of his practice with the firm, he is the Cubmaster of his sons’ Cub Scout pack, and he has played hockey for years.