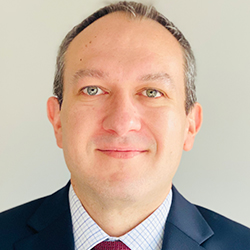 JON is a senior director in Ernst & Young’s (EY) EY Parthenon Turnaround and Restructuring Practice and a restructuring leader with extensive chapter 11 and out-of-court experience. He is also a Certified Insolvency & Restructuring Advisor (CIRA) and focuses his practice on company-side advisory, leading complex restructurings across sectors. He has advised companies across a variety of industries in both chapter 11 and out-of-court restructurings, including § 363 asset sales, plans of reorganization and debt-refinancing. Jon is part of the leadership team for EY Parthenon’s restructuring life sciences sector. In this role, he leads life science projects, helps guide the strategy and execution of business development within the sector, and mentors junior members of the team.

Most recently, Jon co-led the EY team that served as restructuring advisor to Nordic Aviation Capital, the largest chapter 11 filing in 2021, through which he and his team successfully negotiated with over a dozen lender groups to restructure more than $6 billion of debt. He also recently co-led the financial advisory team to Briggs & Stratton Corp. through its chapter 11 filing, which resulted in a successful § 363 sale of the company, maintained 4,000 jobs and provided a recovery to unsecured creditors.

Jon currently serves on the New York office’s Leadership Committee for EY Parthenon as budget director, and previously served on the firm’s New York office Diversity and Inclusion Committee. He has led workshops on restructuring and cash forecasting for the broader EY firm and for the Young Presidents’ Organization. In his community, he serves on the Executive Committee of his town’s soccer club and coaches his kids’ soccer teams.