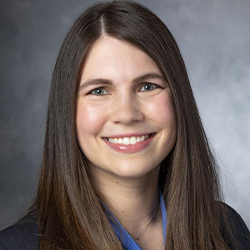 LINDSEY is an assistant professor of law at the University of Georgia School of Law, where her research focuses on the bankruptcy system, drawing concepts from bankruptcy structure and procedure to address broader institutional design challenges. Her articles have been published in the Administrative Law Review, Cardozo Law Review, Indiana Law Journal and North Carolina Law Review. Her most recent scholarship addresses the intersection between mass torts and bankruptcy. Previously, she was an associate at Kilpatrick Townsend & Stockton, where her practice involved a mix of commercial litigation and corporate restructuring matters. She represented corporations, committees and individuals in state and federal litigation, both in and out of the bankruptcy context. She also practiced at a litigation boutique in Chicago and clerked for Hon. Beverly B. Martin on the U.S. Court of Appeals for the Eleventh Circuit.

In 2021, Lindsey advised multiple members of Congress with comments and edits on a proposed nondebtor release bill. She also assisted the House Judiciary Committee with questioning for its August 2021 hearing on chapter 11 abuses, prompting Chairman Jerry Nadler to cite her scholarship in his opening comments. In addition, she has helped academics, judges, members of Congress and many other stakeholders on the subject of mass tort bankruptcies, and her commentary in connection with the Purdue Pharma, Boy Scouts of America and USA Gymnastics bankruptcies has appeared in various media outlets, including The Wall Street Journal, The New York Times, Forbes, The Economist, NPR and Reuters. In August 2020, she collaborated with the editorial team at “Last Week Tonight with John Oliver” for a show highlighting the Purdue Pharma bankruptcy saga.

Lindsey’s prior career was as a jazz musician, and she loved the creativity needed to improvise in response to ever-changing circumstances. However, it was watching her husband’s insolvency career develop during the 2009 recession that hooked her on pursuing insolvency work. Today, she is a member of ABI’s Diversity Working Group and of the Hispanic National Bar Association, and she served as community service chair and vice chair for the International Women’s Insolvency & Restructuring Confederation’s Georgia Network, as well as vice president of the Georgia Latino Law Foundation, an organization that seeks to increase diversity in the legal profession by supporting the Latino legal community pipeline. In 2020, she was selected to join the executive committee of the American Association of Law Schools’ Section on Debtors’ and Creditors’ Rights, a coveted role among bankruptcy professors. She also is a faculty advisor for the UGA Hispanic Law Students’ Association.