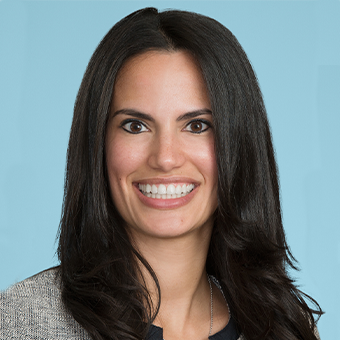 DANIA is insolvency and restructuring counsel in the firm’s Miami and Palm Beach offices, where she focuses on maximizing value for clients in both in- and out-of-court restructurings. She represents debtors, creditors and other parties in interest, including asset-purchasers, in bankruptcy cases across a broad range of industries. A significant portion of her practice also focuses on Latin America, and she combines her legal skills with her native Spanish-speaking ability to help bridge language and cultural barriers with the firm’s Latin American clients.

Soon after she joined Pillsbury, Dania was asked to assist with a chapter 11 debtor case in Puerto Rico, in part because I am a native Spanish speaker. After several weeks on the case, she knew that bankruptcy was the right path for her, and she never turned back. Since then, she has represented major constituents in some of the largest chapter 11 cases filed in recent years, including Westinghouse Electric Co., PG&E Corp. and SunEdison, and more recently in the chapter 11 airline cases of Avianca, LATAM and Aeromexico. She has co-authored many articles, some of which have been republished by scholarly bankruptcy journals, and she has participated in panels at various conferences, most recently at ABI’s 2020 Caribbean Insolvency Symposium, for which she also served as an advisory board member. She also sat on a panel at the third PROMESA Conference in February 2019 in Puerto Rico.

Dania has been recognized as a “Rising Star” by Law360 as one of five “Top Attorneys Under 40” in the field of bankruptcy. She also recognized as a “Rising Star” in Washington, D.C. Super Lawyers for five consecutive years. In 2017, she was one of 40 participants selected by NCBJ to participate in the renowned NextGen Program, and she has been a key member of various bankruptcy teams recognized by The M&A Advisor, the Financial Times and the Global M&A Network with awards in the field of bankruptcy for extraordinary work on behalf of clients. In addition, she has dedicated hundreds of hours to pro bono work, having written a legal handbook for senior citizens and assisting foreign countries like Guatemala and Saudi Arabia, and she served on a project for DC’s Legal Counsel for the Elderly, which involved drafting a legal guidebook for the elderly and working closely with attorneys in various practices She also led a pro bono project for the Advancement Project, which involved analyzing new legislation affecting U.S. immigration practices. She has worked on the firm’s recruiting committee and the committee that organizes the firm’s diversity conference. She also often takes the lead in managing and mentoring junior associates.