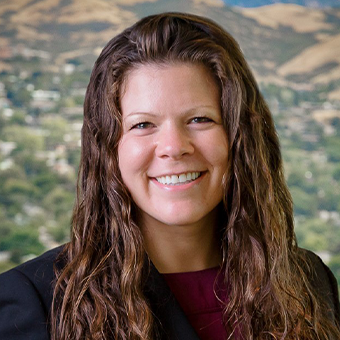 Prior to her legal career, Ellen joined the Peace Corps in 2008 and served in a rural village in Guatemala for over two years. She worked with the women there and helped provide education about health in the home and building composting latrines. Within a month of returning from Guatemala, she started law school. While at the University of Mary Washington, she was elected captain of her NCAA women’s rowing team for two years. Under her leadership, the women’s rowing team made it to the NCAA championship for the first time in the university’s history. In addition, she was a wrangler in New Mexico for two years and started out as a stablehand, despite having no knowledge of or experience with horses. She also participated in Outward Bound in Alaska and has completed many ultramarathons, including 100-milers.

Ellen currently serves as the secretary for the Utah Bankruptcy Lawyers Forum and on the Diversity Committee for KUER (the NPR affiliate in Salt Lake City), and she previously served on the Utah State Bar’s Young Lawyer Division board. Within her law firm, she serves on the Diversity Committee, which is entrusted with developing strategies and tools to increase diversity, equity, and inclusion across the firm and legal profession. She also co-chairs the corporate attorneys’ firmwide pro bono committee and aims to do more pro bono work in the future. In addition, she recently published an article on the CARES Act regarding the SBRA and potential leverage for borrowers, was honored as the 2018 Pro Bono Attorney of the Year by the Utah State Bar Bankruptcy Project, has been named among Utah Business magazine’s “Up and Coming Legal Elite” and was honored by NACVA/CTI in its 2019 “40 Under 40” program.