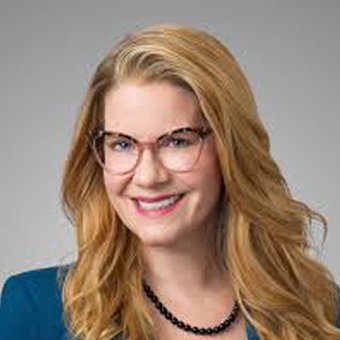 Liz is president of the Dallas Bar Association’s (DBA) Bankruptcy & Commercial Law Section, program co-chair of the Turnaround Management Association and former president of the DFW Association of Young Bankruptcy Lawyers, and she is involved in many more professional organizations. She won the Turnaround Atlas award, and has been named a Super Lawyer “Rising Star” from 2014-20 and as one of the “Best Lawyers Under 40.”

Liz was the first in her family to earn a degree and felt that she had no guide or mentors throughout her journey to becoming a lawyer. Because of that, she believes in being a good mentor, sponsor & leader, strives to bring more women and people of color into the law field. Since 2007, a significant portion of her non-working time has been focused on mentorship, which includes conducting mock interviews, helping students find clerkships and jobs, and having coached teams for 13 years for the Duberstein Moot Court Competition, leading them to victory five times. She also is active in her community, participating in such organizations as the Dallas Volunteer Attorney Program, Attorneys Serving the Community and United Way Metropolitan of Dallas’s Women’s Leadership Course.