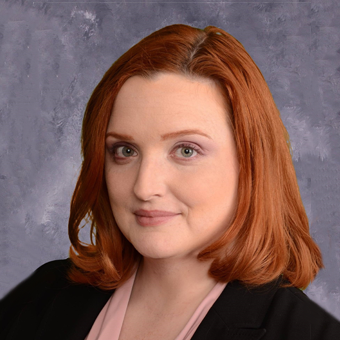 SARAH is the senior judicial law clerk to Hon. Bonnie L. Clair and routinely encounters a variety of issues, including all matters impacting liquidating bankruptcies, all sizes and chapters of plan confirmation, and all facets of adversary proceedings. Her work encompasses a wide array of industries, including agriculture, manufacturing, firearms, energy and health care. Previously, she served the same court as a judicial law clerk to Chief Bankruptcy Judge Kathy Surratt-States and to Hon. Charles E. “Sketch” Rendlen, III until his retirement in May 2020. Sarah’s time in insolvency spans over a decade. Prior to attending law school, she worked as a certified paralegal outside of Fort Bragg, N.C., in the consumer bankruptcy arena, during which time she worked with a diverse clientele comprised of military members, veterans, tribe members and civilians. She served as the president of the local paralegal association, leading educational and philanthropic efforts; the association honored her service by naming her Paralegal of the Year in 2014.

Sarah grew up on a farm in rural Illinois as one of nine children and is one of the first members of her family to graduate from college. Shortly before starting law school, a bout with cancer caused her to lose the ability to speak. After her voice returned, she focused on using the experience in a positive way by developing inclusivity initiatives, coordinating access to mental health care initiatives, and teaching classmates to make blankets for the veteran, homeless, and immigrant communities within St. Louis. She capped her time in law school as the student speaker, representing all graduates at the Saint Louis University Bicentennial Commencement.

Sarah is a contributing author to the ABI Journal and the Wyoming Lawyer. She also serves as a co-chair for Special Projects for ABI’s Task Force on Veterans & Servicemembers’ Affairs, sits on the board of directors for the Midwest Region Network of the International Women in Restructuring Confederation (IWIRC), and is an ex-officio board member of the St. Louis Area Pro Se Assistance Program. She often volunteers her time with multiple law schools, the CARE program, Project Linus, charities that support cancer research, civics education, and various projects with a military or veteran focus. In addition, she provides remote lessons to elementary school students on the American legal system, how federal courts hear cases, and how laws change. For her work, she received the P.A.D. Frank E. Gray Outstanding Clerk award. More recently, both the Administrative Office of the U.S. Courts Office of Public Affairs and the Administrative Office of the U.S. Courts Financial Accounting Division recognized Sarah for her efforts to sew facemasks for donation during the COVID-19 crisis.