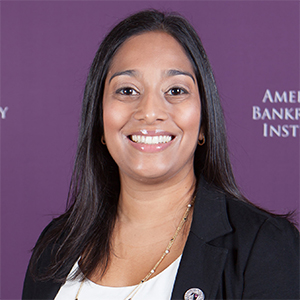 ANU works out of the firm’s Corporate Restructuring & Bankruptcy practice and has been involved in bankruptcies and restructurings across a diverse range of industries, including health care, shipping, telecommunications, manufacturing and retail. She represents debtors, official committees, bondholders and other investors in chapter 11 and chapter 9 bankruptcy cases, out-of-court restructurings and other distressed situations in all facets of restructurings, including motion practice and confirmation hearings in court and transaction negotiation, such as sales and balance sheet deleveraging. She currently represents major automotive manufacturers in restructuring negotiations with Takata Corp., the airbag inflator supplier at the center of the largest auto supplier recall in history.  She recently represented the Official Committee of Unsecured Creditors of CHC Group Ltd., the largest helicopter service provider servicing the oil and gas industry.

Anu was recognized by M&A Advisor as an Emerging Leader for 2017 and by Super Lawyers from 2013-17, as a “Rising Star” for 2011-12 and as a one of the Top Women Attorneys for 2014-16. She has also been a frequent speaker and contributed articles to several insolvency publications. She is a member of the Turnaround Management Association’s Network of Women Committee and the New York Chapter of the International Women’s Insolvency & Restructuring Confederation.

Anu serves on the Women’s Initiative Committee and previously served on the Associates Committee at Kramer Levin. She is vice president of the ABI Law Review Alumni Association, where she is responsible for overseeing its mentoring program and alumni/student relations. She has also participated in a cycling event benefiting rare cancer research, and she is on the board of Reading Partners, which provides children with individualized reading support, and on theboard of the Young Professionals Mentoring Program, through which she has mentored New York City high school students for over a decade.