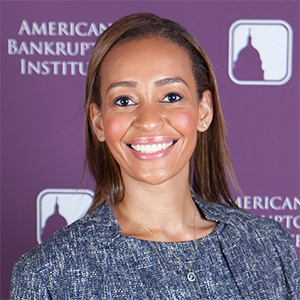 CHRISTINE is a leader within the firm’s Corporate Restructuring Group. She serves as a formal and informal mentor to the associates in the group, leads the firm’s junior associate training on chapter 11 plans and disclosure statements, spearheads the group’s periodic meetings on developments in the restructuring field, and organizes presentations to the group from investment bankers and financial advisors. She is also one of the founding members of Skadden Women Excelling in Law and Leadership (SWELL) and serves on its Steering Committee to promote the recruitment, retention, development and advancement of women attorneys at the firm.

In 2017, Christine was nominated and inducted into the International Insolvency Institute’s NextGen Leadership Program, which recognizes “Rising Stars” in the international insolvency area. Her work has received recognition, including  M&A Advisor’s “2013 Out-of-Court Restructuring Deal of the Year (Over $1 billion)” and M&A Advisor’s “2009 Out-of-Court Restructuring Deal of the Year.” She is a member of the Committee on Bankruptcy and Corporate Reorganization of the New York City Bar Association and has written articles for the New York Law Journal, the Journal of Corporate Renewal and The Bankruptcy Strategist.

Christine serves on the junior advisory board of Her Justice, a nonprofit that partners with more than 80 New York City law firms to provide free legal services to low-income and battered women and children. For the past six years, she has organized a team to participate in Her Justice’s Story by Story stair climb, raising approximately $100,000 for victims of domestic violence. In addition, she has taught debate to middle school students in Harlem through Citizen Schools, a nonprofit that partners with schools in underserved communities to close the achievement gap. For her volunteer work with Citizen Schools, she won the President of the United States Volunteer Service Bronze Award in June 2016.