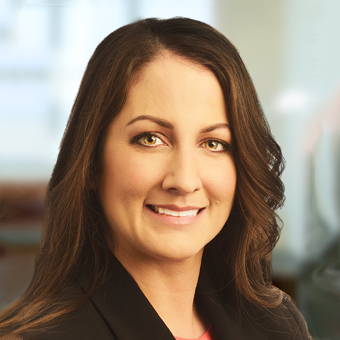 LINDSI is a shareholder and represents chapter 11 debtors, creditors’ committees and other parties to bankruptcy litigation. She represents Fortune 100 companies and manages complex restructuring and insolvency deals with assets in excess of $100 million. Previously, she practiced with Gallagher & Kennedy in its bankruptcy and insolvency group. Often referred to as the “rules maven,” she was asked to serve on the Arizona Bankruptcy Court Local Rules Committee, a volunteer role she assumed for two years. She was instrumental in assisting with the time-intensive and complex revision of Arizona’s local rules, which have subsequently been approved by the judges and released. In addition, she is a past board member of the Maricopa County Bar Association's Bankruptcy Section and a past president of the NextGen Emerging Leaders Board of the Turnaround Management Association’s Arizona Chapter, having received its 2012 Turnaround of the Year Award.

Lindsi grew up on a farm and began her career as a special education teacher for Teach for America before deciding to apply to law school. She voluntarily deferred her law school admission for a year because the school district where she had been working had been unable to find a qualified replacement for her position, and she did not want her students to be without a special-education teacher.

Lindsi serves on the advisory board for ABI’s Southwest Bankruptcy Conference and is an active member of the National Conference of Bankruptcy Judges, having participated in its Next Generation program in 2017. She has been named to the Maricopa County Bar Association’s pro bono lawyer honor roll for multiple years in recognition of her volunteer attorney service at the Maricopa County Bar Association’s financial distress clinic, where she provides pro bono financial counseling and legal advice to low-income people who find themselves in difficult situations that include garnishments, repossessions, bankruptcy and debt management. She also mentors younger attorneys and female litigators in particular. In her recreational time, she is a hiker who has hiked the Grand Canyon seven times so far and successfully guided clients and friends on the trek, which can take anywhere from 9-13 hours depending on heat and weather conditions.