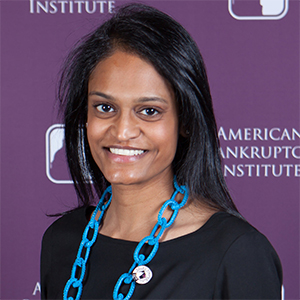 SHANTI represents debtor companies, unsecured creditors’ committees and commercial restructuring lenders, among others, and is a member of the firm’s Women’s Initiative and Diversity & Inclusion Committees. Her representations have included Total Hockey, Inc. (and affiliates) in St. Louis and hundreds of student creditors to help them navigate through the impact of the insolvency proceedings of Corinthian Colleges, and she single-handedly prosecuted 65 avoidance actions on behalf of the Open Range Communications estate.

Shanti has presented at ABI’s 9th Annual Mid-Atlantic Bankruptcy Workshop and on judgment enforcement in Delaware through the Lorman Education Series. She co-wrote an article on bridging the gender gap in the restructuring industry for The Wall Street Journal and was one of the primary drafters of the Polsinelli/TrBK Healthcare Distress Indices, which has been widely cited across industries. For her efforts, she was named a Delaware Super Lawyers “Rising Star.” Member relations director for ABI’s Unsecured Trade Creditors Committee, she also serves as an executive board member of the Delaware chapter for the International Women’s Insolvency & Restructuring Confederation and the South Asian Bar Association of Delaware, and is honored to be part of the diversity initiative of the Delaware State Bar Association.

Shanti captained Polsinelli’s Cycle for Survival team, raising more than $60,000 for rare cancer research in two years. As a social science research analyst with the Social Security Administration, a position she held prior to obtaining her law degree, she wrote a profile on children receiving Supplemental Security Income and demonstrated Social Security’s role in the economic security of the elderly, receiving its 2003 Office of Policy Commendable Service Award. She also clerked for the Missouri State Public Defender’s Office, conducting eligibility interviews with prisoners and arguing probation revocation motions before associate and circuit judges.